To break your bad habits that are causing blurry vision, you need to break up what you’re doing into separate tasks so that you can understand what you’re really doing and be conscious of it as you’re doing it. There are multiple steps to seeing. This is analogous to how I’ve written recently about breaking up what you’re looking at into smaller pieces, but here we’re looking at not what’s out there, but what’s going on inside you.

These are the three general steps of seeing. Let’s go through them with the flamingos and then see how they relate to one another. 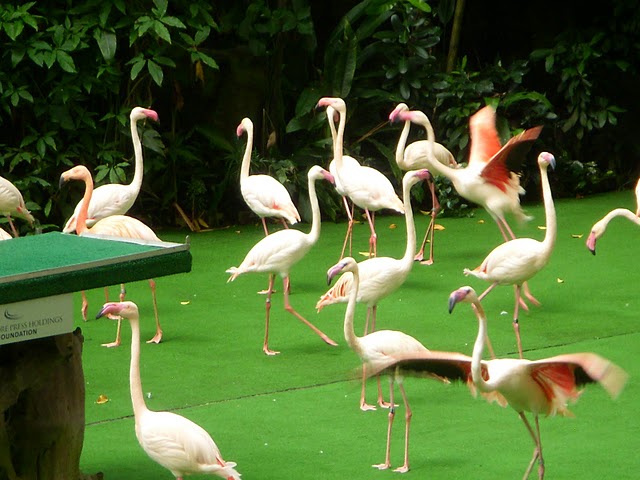 1. Pay attention – Look for the eye of a flamingo above, and study it. To do so, move your attention slowly along a line cross-crossing back and forth. This is a constant process of thinking, “What’s next to this? And what’s next to this?” and so on as you move your attention along.
2. Move your eyes – Let your eyes are drawn to what you’re paying attention to and thinking of. Your eyes follow your attention, whether you remain paying attention to the flamingo’s eyes or beak or something else nearby.
3. Focus – Your visual system takes care of this. There’s nothing you can consciously do to control, in the moment, how clear an image is. This is a complex process where the eyes receive light rays onto the retina, the data is processed and send to the brain for more processing, and the eyes adjust focus as they move.

That’s how it’s supposed to work. People go wrong by mixing up the steps. Below are examples. Don’t do any of these!

2. Move your eyes, 1. Pay attention, 3. Focus. Here they concentrate on moving their eyes around a flamingo, with the idea that according to the Bates method they have to keep their eyes moving, and then they try to pay attention to whatever somewhat random flamingo or spot of grass they moved their eyes to before jumping to the next spot and trying to pay attention to it. This doesn’t work because they are interfering with the seeing process by forcefully moving their eyes and giving their attention a backseat, essentially subjugating and abusing themselves. Real attention has to drive it, or you remain as a mere passenger and the entire process doesn’t really work out in your favor.

2. Move your eyes, 3. Focus, 1. Pay attention. Here people push their eyes around first, as above, but instead of paying attention to what they’re looking at, they hope that they will magically see a whole flamingo or a part of a flamingo by virtue of moving their eyes around, and they wait for things to come into focus as they remain disinterested in it unless it’s completely clear. They never fully get to the “Pay attention” step. You have to remain interested and engaged in what you’re looking at.

3. Focus, 1. Pay attention, 2. Move your eyes. Here they start off by trying hard to “see” or focus on the flamingo. People stare at a flamingo and try to bring it into focus without moving their attention around at all. This doesn’t work because the gaze has to move to provide a constant context and more information to help sort the data. There is a whole new set of visual data when you move your gaze just slightly, barely at all, and your visual system takes all that data into account as it forms an image for you.

3. Focus, 1. Move your eyes, 2. Pay attention. As above, they start off by trying to focus on a flamingo by staring, but as with the example before that, they start moving their eyes around to different parts of the bird when staring doesn’t work, hoping to get a clear image, and only paying attention as a barely interested passenger in the constant movement. This is something people really only learn by misinterpreting the Bates method.

A blob of blur isn’t very interesting, but when you look at it as many pieces making up the blur, you start to see things. It’s much easier to pay attention to one thing at a time, meaning the smallest piece of detail you can imagine. Anything larger than that means paying attention to multiple things at once and puts your visual system under a strain that it can’t handle. That’s what “strain” really means, even though in the Bates method the word is often twisted to mean all kinds of abstract things that just confuse people. Strain is a situation where something is subjected to more stress than it can handle. Under strain, anything eventually fails.

So this was just something I was thinking about this morning. These blog posts are just my way of getting things out there until I put them together into a more organized and complete guide that will hopefully be of some use for guiding people through the vision improvement process from start to finish.

This is so accurate. So many times I’ve seen my self avoiding what i am looking and straining in that way… I hope I can change my habits by now. Thanks for these awesome posts.

Great! That was a pretty old post, but keep reading the new ones. Let us know how it goes!