"> Are Your Eyes Sensitive to Sunlight?
Skip to content 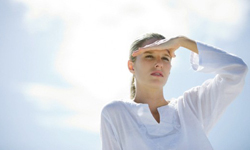 Sunlight sensitivity, called photophobia, often can be dealt with in a natural way. You may just need to learn how to use your eyes better and learn how to take in sunlight without having such a bad reaction to it.

When your eyes become more relaxed you will find that sunlight becomes much less of an issue. When your eyes are working better, in other words, they can handle strong sunlight. When you’re regularly straining your eyes with misuse, it’s no surprise that they can’t handle the intensity of strong sunlight. The other part of it is adapting to sunlight by going without sunglasses more often until you can manage to leave them off without discomfort, and/or by doing one of the suggestions below.

And the below are snippets from a couple issues of Better Eyesight magazine, published by Dr. Bates, the founder of the Bates method of vision improvement.

STORIES FROM THE CLINIC, BY EMILY C. LIERMAN

A young man came to the clinic recently suffering terrible pain in his eyes and head. He complained that he could not stand the light. He told Dr. Bates that he had been to other clinics where they told him he had iritis. Getting no relief from eye drops which were given him by others, he came to us to see if we could help him.

Dr. Bates examined his eyes and said that the other doctors were right. He did have iritis. I did not know what the discussion was between this young man and Dr. Bates so while Doctor was busy with other patients, I started to treat this case of iritis without realizing that the eye was diseased. I noticed however that the eyes were inflamed.

As I do not always ask the patient what the trouble is, on account of the short time we have to treat each patient, I go right ahead and test their sight and then work as earnestly as I know how with my patient until I have relieved the pain and improved the sight. I placed the young man fifteen feet from the test card and asked him to read as much as he was able. He complained that the electric light near the test card caused a severe pain in his eyes.

So I placed him in the sun and with my sun glass, I flashed the strong rays of the sun on the white part of his eyes after I had raised his upper eyelid and had him look down. Then I again placed him fifteen feet from the test card and this time he began to read the letters without complaining about the light until he finished reading the 40 line, when he again said the pain had returned.

I taught him how to palm and left him for a half an hour. When I returned to him I was much surprised to find that the redness of his inflamed eyes had disappeared. His vision also improved to 15/10 with each eye separate. All this time Dr. Bates was busy with other patients and was paying no attention to the young man or me. I was very happy when doctor told me what I had accomplished.

He said: “Did you know this man had iritis?”

Then the Doctor proceeded to tell me what was the usual experience with the treatment of iritis, that these cases required usually three or more days before the pain in the eyes and head was relieved.

In most cases it might require two weeks of treatment before the sight could become anything near normal. Always eyedrops were prescribed to be used frequently during the day, sometimes at night and in all cases general treatment was prescribed and this treatment was usually continued in most cases for several years. To relieve a case of iritis in the short time of one hour was very wonderful and this without local treatment and without internal medicines.

“I have never in my life seen a case of iritis so bad obtain perfect sight so quickly and acquire such wonderful relief in the condition of the eye,” the Doctor said.

Many people when they go from a dark room out into the bright sunlight are dazzled, and feel uncomfortable.  If they put on dark glasses for a time, the eyes are more comfortable, and they are tempted to wear such glasses most of the time.

It is a common practice that when a patient goes to an eye doctor, and complains of the discomfort of the strong light of the sun, the doctor will recommend dark glasses, which are usually comfortable in the beginning.  Later on, however, the eyes become accustomed to wearing dark glasses, and will feel uncomfortable when the light is good.  They are practically in the same condition as they were when they first put them on.

Miners, who work underground who seldom see the daylight at all, always have diseased eyes.  There are some diseases which cannot be cured without exposing the eyes to the light of the sun.  No matter how strong it may be, while it may prove temporarily uncomfortable, the sun has never produced a permanent injury.

Many people purchase dark glasses along with their other vacation necessities, because they are afraid that the reflection of the sun on the water will harm their eyes.  Others have found that by becoming accustomed to the strong light of the sun, their vision was materially improved, but by wearing glasses to protect their eyes, their vision always failed.  The proper thing to do is to become used to the sun at all times and in all places.  The eyes need sunlight.  If they do not get it they become weak.

One of the best treatments is to focus the strong light of the sun on the white part of the eye with the aid of a burning glass (sunglass), which is kept moving from side to side to prevent the discomfort of the heat, while the patient is looking far down.  In many cases treatment has accomplished in a few minutes a complete cure of sensitiveness to light.

It’s easy for some people to say when they don’t feel the severe pain in their eyes and get a migraine from sunlight. My eyes hurt everyday and I’ve been to the eye Doctor twice with no solution or medication. I’m beyond frustrated at this point. I’ve made another appointment with a new eye Doctor and I’m hoping to be helped this time.

Yes! One of my main vision “exercises” now is to walk outside when it is sunny, and welcome all the light that is coming into my eyes, feeding my visual system. I can feel my face and eyes relaxing as I move from fighting the light to accepting and appreciating it. Good post, David — thanks.