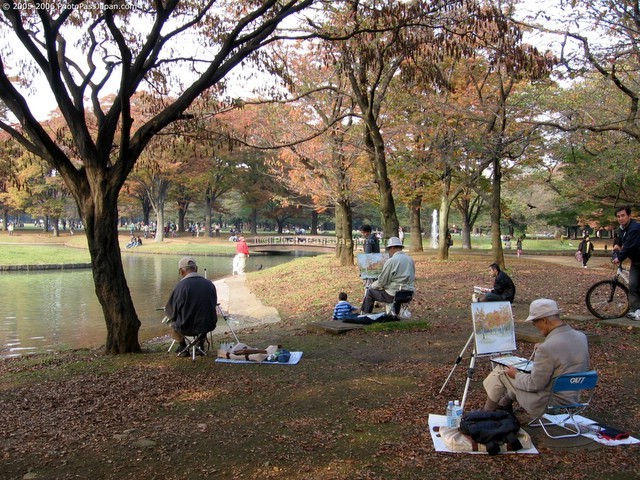 One of the first things you might notice in this picture is the man painting. Your attention moves to him. It doesn’t matter whether your attention was “drawn” to him or you were just glancing around the picture to find something worth looking at. You don’t notice only the fact he’s painting, but what he’s painting. It appears to be the scene in front of him.

So in the man’s painting, what details can you at least partially see? It’s important to note that it counts even if you just partially see something, or if you have a guess as to what might be there. People with blurry vision tend to glance at it and move on, studying it no further, and doing the same thing with pretty much anything else they look at. This is a huge mistake. There are at least a few possible reasons you do this:

The first reason, that it’s hopeless, is something you need to intellectually overcome by means of practicing the right way to do it, which is what I really want to talk about. The second reason, that it’s uncomfortable, is because you’re not doing it right. The third reason, that it’s too intense, is overcome with time. The fourth reason, that you’re anxious about missing something, is out of the scope of this posting, but it’s worth thinking about and can also be the reason you fix your eyes in a stare to try to see everyone at once instead of moving your eyes to specific details.

So when you attempt to study an object in smaller detail than you are able to immediately perceive, it appears to be blurry. You can’t just let it go. You have to take control of your visual system by enforcing your will. Speaking affirmations in that respect helps align conflicting parts of yourself to your purpose. But your brain / visual system doesn’t directly hear such an order of “I want to see!” and respond. The language your brain understands and responds to is your mental refusal to accept the result that your brain is providing. It’s the same as telling an employee who has presented a poorly organized, incomplete report to you, “Tell me more. What about this? What are the possibilities?” You are requiring it to dig deeper and work harder in order to serve you to the best of its ability. As you perceive blur at a certain level of detail and can seemingly go no further, you have to guess what might be there. Is there any black? Any purple? Any green? What could the speck of white be? Look at the man’s painting in the portion of the picture below and consider such questions. 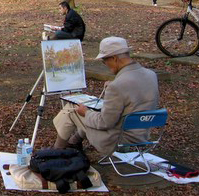 Notice what happened as you did it. Your gaze moved around the painting in a search. You were looking around to find such colors and make at least a little bit of sense out of it and actively engage yourself in perceiving, instead of just accepting the image your brain gave you and not considering what it isn’t giving you. You became interested. That’s what it takes.

Look again. Do you see the grey button on the man’s hat? Look carefully, without leaning closer.

If you didn’t, that’s because there isn’t one. But what did you see? You suddenly noticed the shades of darker colors on his hat as you searched for a spot of grey. You just improved your vision, because you saw something you didn’t notice at first. Don’t think of your quality of vision as just how blurry or sharp it is. Better vision is being able to see things you didn’t notice before. So every time you notice something new, because you’re looking directly at a new spot with curiosity of what else is there, you have improved your vision, and you should consider it another success. And your brain will respond, and your eyes will start to focus in response to your directing of your attention to smaller details.

So I hope I’m starting to make it clear that improving your vision is not a matter of doing certain things because you’re forced to do them if you want to see, but a matter of changing the way you go about perceiving details so that better vision is a completely natural result.