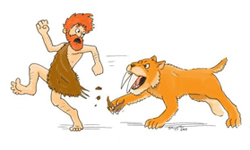 Do you ever notice the “deer in the headlights” look is common in people with myopia? As if their glasses somehow freeze their eyes in place? And as if they can’t totally relax, and yet they can’t react appropriately to threats, either. They’re stuck somewhere in the middle.

Or does it sound familiar because that’s what you’re like yourself?

Either way, it isn’t your imagination. Here’s what’s going on.

What you’re seeing is a lingering “fight-or-flight” response. Your nervous system does the response automatically in response to a perceived threat. Your adrenal glands release hormones and your body leaps into action. That’s fine and dandy.

But it isn’t meant to continue for more than a moment. It inhibits actions in other parts of your body and brain so it can devote more resources towards making your muscles spring into action. It’s intense and isn’t sustainable. If this fight-or-flight response is brief and passes, you recover and go about your life normally.

What happens if it lingers, such that you’re not on maximum alert but you never totally come down from it either? Your body being constantly on medium-high-alert is exhausting.

One symptom, of course, is muscle tension. Muscles tend to contract in groups, so when some muscles of your face start to tense it isn’t hard to imagine your eye muscles tensing also. Your visual system is elegant and sensitive, and something like chronic tension can mess it up big time.

Part of the natural part of the fight-or-flight response is a widening of awareness, at the cost of resolution. In the moment it’s more important to identify an escape route or notice another attacker than it is to see the smallest details.

So some of the main components of the fight-or-flight response are:

Bringing Yourself Back Down

Now that you understand the main components you can work on letting it go.

One thing athletes learn in weight training is that compound movements (where multiple joints are used in complex movements) are the most important. It helps your body work together as one strong unit that has functional strength that translates into real-world situations. The same principle applies to breaking habits and shifting yourself into a better way of being. You have to find a way to attack a bunch of issues at the same time with one tool.

As I’ve said many times, vision improvement is mental, and your mind is more powerful than you give it credit for.

As an example, let’s use this beach scene. 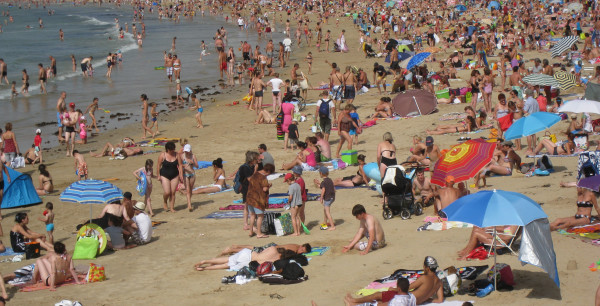 Look at the tip of one of the umbrellas. Imagine it is the center of your universe. Nothing else matters.

As soon as you’ve done that, move your gaze to whatever or whoever is under the umbrella, making it the new center of your universe. You aren’t concerned with anything besides that. It doesn’t matter whether you can see it well enough to identify what you’re looking at as a person’s head or a chair or whatever. The purpose is to let that one spot be the only spot you’re responsible for seeing.

At the same time, you are not responsible for how well you see each spot. You can’t “make” it clear by force.

You are merely allowing yourself to let go of all the other people and activity on the beach and be mesmerized by one spot at a time.

But don’t stay on a spot. Keep finding another one. After all, you do want to look around and see what there is to see. But you have to do it at the pace you are capable of, and later as you practice enough and start to understand this, you can take in more details per second.

Now tell yourself on each spot how it’s incredibly relaxing to give up having to see everything at once and only have to pay attention to one spot. Notice how it’s such a relief. Feel the muscles of your eyes and your entire body relax more and more on each spot. Remind yourself it’s perfectly safe to not look at everything at once, and that you will notice anything you need to.

Keep practicing this with everything you look at. The more you bring your awareness back down to normal by practicing this, the more you will move away from the stress response, and this new relaxed way of perceiving the world will become your new habit.

What happens when you try this? Share your experiences!