"> [VIDEO] Your Vision is More Than Your Eyes
Skip to content 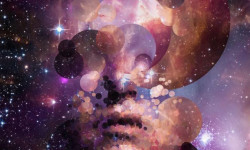 Bates would have his patients palm to begin with. Palming, if you’re new to this, is closing your eyes and covering them with the palms of your hands, in such a way where you’re not touching your eyes, and the fingers of one hand overlap the fingers of the other hand on your forehead. It’s an easy position where you’r excluding most or all light. People have different ideas about what this does, but I think people mainly just feel better about covering their eyes with their hands for protection and can relax their eyes more easily. And the touching of the area near the eyes also offers a certain distraction like a crying child being comforted by a parent by being hugged.

But anyway, Bates found that people were able to relax better when they covered them with their hands softly in this way. You don’t even have to do it. It’s not critical.

While they were visualizing, Bates would have them visualize something black, like the letters of the eye chart on the wall or the words in a book. I think he particularly liked the contrast of black on a white background.

Eventually his assistant found that visualizing something of any other color would work just as well as black. A banker might visualize money really well, or you might be able to visualize bright snow on a mountaintop.

After a moment, his patient would remove his hands, open his eyes, and glance at the eye chart briefly, then close his eyes again for a minute and repeat. This is called flashing.

I believe he also suggested visualizing the actual object you’ll be looking at when you open your eyes, if you can, instead of any old random thing. That I think is more effective when you can do it. I’ll get to that further below.

You’re really looking at an image in your mind. You’re not looking at what’s out there.

You think that when the light rays come in, there’s a 1 to 1 relationship such that every piece that you perceive in your visual field comes from a piece out there, and that everything comes in and is reassembled in the same spot and that’s it. But that’s not how it works. This is an illusion. Your mind actually fills up a lot of holes and makes stuff up. It looks very convincing. That’s the power of your mind at work. It’s so instantaneous, so easy, that it seems obvious that you’re seeing the light rays. But there’s so much more going on that you don’t notice.

You combine other senses to produce what you see in your mind. You pull from your memory and use your imagination to consider what might be there.

Anyone with good vision can only see the very center of their vision best, because of the way the retina in the eye is built. They have to keep looking around for things to appear sharp. If they didn’t, everything outside the very center of their vision is so resolution that everything would look weird like in some kind of tunnel. But they don’t notice this. They look around and everything appears clear because they pay attention to where they look. So they imagine everything being clear even though that isn’t how their eyes are taking it in.

The blind spot test is interesting. It’s basically done with a piece of paper, a spot you look at, and a colored dot some distance to the side. You move your head closer until the dot disappears as it hits your blind spot. Your blind spot is kind of far to the side, but still well within your visual field. This is the spot in your eyes where the optic nerve connects to the retina and there’s no photoreceptors. Normally, if you have no light rays coming in, it’s black, such as when you close your eyes. But in this case, even though the blind spot occupies an area of significant size in your visual field, you don’t perceive black. Your mind fills it up with other stuff. So you don’t even know about this unless you do this experiment.

Blind people can visualize, or if they weren’t always blind and have some memory of seeing. Jacques Lusseyran, author of the book And There Was Light, described how as a child his eyes were removed after a bad accident where his glasses shattered into his eyes. And he says going blind was the best thing that ever happened to him. He developed an extraordinary memory where he could remember the phone numbers of hundreds of other kids that were a part of their group in the French Resistance, and other roles his visualization played in his daily life and the Resistance. He says he could walk along a path and point out each tree along the side.

Lastly, you of course can visualize too. If you’re good at it you can get an image that is clear and complete, much like if you were physically looking at it with your eyes. This also happens when you’re dreaming or in an altered state where you’re getting vivid images.

Tom Campbell, a physicist and pioneer in the field of consciousness, and all-around brilliant guy, describes switching data streams, so that the visual data is coming from somewhere else instead of your eyes.

Your eyes do the job of gathering information. You have a ton of it inside your mind that you’ve already gathered or put together. You don’t have to 100% depend on your eyes for visual data. You’re only getting more.

When you look at something, you can’t make your eyes focus. You can only point them in the right direction, towards what you want to visualize, and they’ll gather what they can, whether it’s clear or blurry.

With that in mind, here’s something you can do.

If you can’t get a good, clear image to pop up in your head, that’s ok. It doesn’t have to be perfect, just better than what your eyes are giving you. Don’t worry too much about it. Do the best you can.

Thanks for listening/reading, and please leave your comments below!