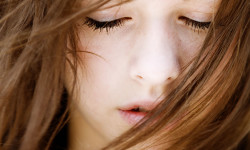 How do you actually visualize?

You can’t hardly think without visualizing to some degree. Every time you think of something, whatever pops up in your head, even though it’s not that clear, if you can get some kind of sense of the form or color or can recognize something you see, that’s all visualization.

People llike to think “I’m special, this doesn’t apply to me, I’m missing something in my brain that everyone else has, so I’m a special case.”

You’re not. Everyone is pretty much the same. You might just be bad at this and need to improve your abilities.

So here’s the wrong way to visualize… Close your eyes and keep your eyes pointed straight ahead at the dark field on the back of your closed eyelids. Try to form an image in the dark field. That’s not going to work well.

What ever the object is that you want to visualize, don’t try to draw it in your head. Consider what parts the object has, and from there on you have to wait and give it time to pop up in your head as you continue to think about it. It might take time and it might not happen. But you have to give it time, recognizing that your subconscious mind is the only thing that can bring it up.

Let’s use an eye chart as an example, that you would hang on your wall. An eye chart works good because it’s god high contrast letters that you can recognize, of varying sizes. You don’t necessarily need an eye chart.

You can also do this while keeping your eyes open, if you can. Look away from the D, and without closing your eyes, consider what you just looked at, paying no attention to what your eyes are pointing at now, then look back at the D and repeat.

Then you can actually look at the D, when you’re ready, and visualize it at the same time. So you’re seeing and visualizing the same thing. Even if it’s not clear, you’re focusing on what’s in your head.

These are just progressive steps to move yourself towards a more natural way of seeing. You can try each of these at any point, but you should find the first example with closing your eyes is more straightforward and less tricky.

Note that you’re not trying to make your eyes’ image clearer. When you try to use your inner image to make your eyes see better, you’ve got it backwards. The image you see is always in your mind. It does no good to strain your eyes to see, because that’s just data coming in, and the important thing is what’s going on in your mind with the image.

Jacob Liberman, an optometrist, author of Take Off Your Glasses and See, who used to go the traditional route of prescribing glasses, described one of his early experiences. He was in his office and suddenly saw clearly. He checked his eyes with his equipment, and they said he was still myopic. Still he could see clearly. Perhaps his eyes were changing back and forth between focused and unfocused. Who knows.

For the sake of argument, let’s say your eyes do have to focus. When your visual system is working well, as evidenced by better visualization, your subconscious mind will focus your eyes. That’s the way it’s going to happen.

You can try the above exercise as many times during the day as you want. You might get results while you’re doing it or later in the day. When you lie down to sleep at night, that’s also a perfect time to practice it, and you might end up practicing some while you’re asleep, which is great.

Leave your comments below!