"> Is the Bionic Lens surgery a good solution for cataract?
Skip to content 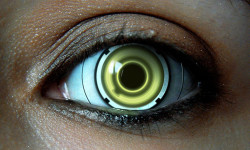 However, some of the buzz surrounding this is hype. This surgery seems to be meant to only replace traditional cataract surgery, not eliminate things like myopia.

The problem that cataract patients have with traditional cataract surgery now is the replacement lens doesn’t focus for more than one distance. So they get the artificial lens that’s carefully calculated to focus their eye to infinity, which is practically defined as 20ft or farther, as there isn’t much of a difference in focus between 20ft and a few miles. Inside 20ft, however, the cataract surgery patient will no longer be able to focus correctly. After surgery they may need a couple different pairs of reading glasses, one pair to be able to see at a few feet away, and perhaps another pair to see best at 5-10ft away such as when interacting with people indoors or watching TV. Many sports become a serious problem, as they often require people to focus rapidly for multiple distances depending on where a ball or other players are.

This lens Dr. Webb developed is influenced by the normal focusing mechanism of the eye. Like traditional cataract surgery, the procedure involves cutting open the cornea (the clear layer of the eye covering the pupil), removing the natural lens, and folding up the artificial lens like a taco to insert it through the pupil, at which point it will uncurl into position. So once this is done with his lens, the eye should be able to focus.

Is another artificial lens the best solution?

So Dr. Webb came up with a new surgical solution, but it’s still a drastic move. Western medicine favors severe interventionist treatments that involve ripping open the body and replacing parts. Doctors have learned a lot about the body over the years and are getting better and better at working with its parts, but they often lack the understanding that the body has an intelligence that is best suited to deal with many of the problems, given the right support.

There are always side effects of surgeries. This isn’t an exception. Surgery is always an injury to the body, and there’s never a guarantee that it will heal properly. In the case of the eye, you’re talking about a delicate, carefully calibrated organ that is made to focus an adapat in many different ways.

The argument for surgery in this case is the natural lens has become cloudy and may also be hardening with age to prevent the ability to focus for varying distances (known as presbyopia, or middle-age sight).

If not surgery, what is the best solution? I’ve written an article, “Natural Treatment for Cataract Without Surgery,” that goes over approaches to reversing cataract, based on the general approach to reversing other eyesight problems as presented on this website, along with links to more info.

Prevention is always the best solution, of course. A disease, especially one with constantly noticeable effects like the cloudiness of vision that cataract causes, can cause p4enough sychological distress to put the body into a mild or moderate stress response. This stress response isn’t as severe as, say, when a rabid dog or bad guy is about to attack you, but like any stress response that becomes chronic, it can be enough to prevent the body’s natural healing mechanisms from working. Diseases can still be reversed, but once they visibly show up, they can be significantly harder, psychologically speaking, to recover from for this reason.

Your article is as interesting and good as always, thank you for opening my eyes, figuratively and literally!

Good article, David. I’m repeatedly surprised at how many folks don’t realize a cataract operation not only replaces the cloudy lens with a clear one, it usually includes a distance prescription you won’t be able to remove! Talk about forcing your vision into a cage! And yes, the trauma of having one’s eyes cut open is a bigger deal than the surgeons want to admit. How could your eyes not resist what feels like an attack? I don’t see this as an advance, just one more example of treating the precious sensitive human body like a malfunctioning machine.

When I was a kid, I heard about laser surgery for myopia, and I thought of it like a laser that zapped away the junk in the eye that was causing the blur, cleaning everything up, and I would see clearly. I planned on getting it, at least until I learned about another solution We believe what we want to, I guess!