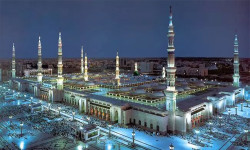 In 2013, a university in Saudi Arabia conducted a myopia control study with Saudi teenage girls. The myopia epidemic has been going on there too, but from what I understand it isn’t as bad as in the US and especially in some Asian countries.

At first the article talks about vision therapy in terms of what optometrists prescribe to patients. Here in the US, that would actually be what we call behavioral optometrists, who I believe mainly work with kids and with problems like convergence insufficiency more so than any treatment to reverse myopia, although some experiment with that too.

But in the description of exercises, it’s all Bates method stuff. Sort of…

The palming description is ok, except that they seemed to put a heavy emphasis on readjusting the hands to block every trace of light. That isn’t really the point. Blocking most of it is plenty good, and being too obsessive about it kind of defeats the purpose, as it’s better to have relaxed hands and relaxed everything else so you can relax your eyes and mind too.

That was all, just those three. I guess the idea was to make the instructions simple and standardized. A more in-depth approach is a whole lot better, but I can understand the mentality of doing just a few things and gauging the effect.

Nevertheless, the results were positive after 6 weeks. Kids are pretty easy, I guess. It should be noted there was no control group given a “fake” (placebo) version of the exercises. That’s pretty tricky to do without risking stumbling upon an alternative version of an exercise that may actually work better.

They suggest further study on how the brain reorganizes itself to take care of problems like this when given the right stimulation:

The scientific community is gradually embracing the notion that rehabilitation of motor, sensory and cognitive impairments can alter brain reorganization and result in functional recovery. Therefore, the training and rehabilitation of functional visual disorders through repetitive, targeted visual rehabilitative techniques should not be a foreign concept. Based on what is now known about neuroplasticity, it can be inferred that the mechanism for the efficiacy of VT [vision training] and rehabilitation is through strengthening synaptic connections and inducing cortical reorganization or maximize visual efficiency. The principles emphasized in successful VT are the same principles used by other rehabilitation specialties to maximize recovery of function through induction of neuroplasticity. These include repetition, motivation, loading, multi-sensory integration and feedback.

I concur! I’m happy about the attitude they’re taking with this. This is the right line of inquiry to be following. Keep going down this road and you find that your thoughts are the critical factor in all this. Sometimes they put these type of mental changes down to subconscious factors in how the brain processes things given the right inputs, which is fine, but there’s also a major factor of how individuals consciously control the outcome with their thoughts and attitudes.