"> Alternative Myopia Research and Proven Natural Treatment – 4. A Radical Mind-Body Theory for the Cause of Myopia
Skip to content 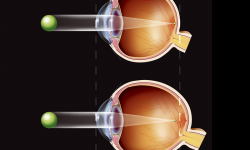 Section 4 of this article is a continuation from the previous blog post,
Alternative Myopia Research and Proven Natural Treatment: Section 3.  Problems with the Hereditary Theory

The broad advances made in the natural sciences during the nineteenth century inspired those in vision science that similar progress was possible within their discipline. Beaming with such confidence, a prominent ophthalmologist of that era stated that his profession had “furnished means more and more exact for the determination of the visual acuity and for the measurement and correction of its defects.”[24] Studying a rock in geology, or light through a prism, is one thing; studying the eye simply as a refractive object in the skull of a live human subject is quite another. Taking ‘dead matter’ to the extreme, there was even a study conducted in 1903 that helped bolster the genetic theory of myopia based on measurements and analyses of eye sockets in cadavers.[25] The Cartesian mind-body schism and reductionism were, thus, very much the order of the day at that stage. Unfortunately, reducing the eye to an object, cutoff from the mind and the rest of the body, remains the current orthodox vision model.

For example, artists’ depictions of disembodied normal and myopic eyeballs are commonplace, comparing one to the other, such as shown in Figure 4.1. The normal eyeball, we’re told, is primarily spherical in shape, whereas the myopic eyeball is elongated into somewhat of an egg shape. This out-of-round shape is responsible for myopic blur, as images converge in front of the retina (the inside back of the eye) instead of directly on the retina for normal vision. However, bear in mind that the oblong shape depicted is highly exaggerated simply for the comparison and explanation. In reality, the greater axial length is quite meager for myopia, as an increase of only half a millimeter (~ 1/64″) apparently reduces acuity from 20/20 to 20/200 or worse.[26] The status quo view contends that the elongated eyeball shape is permanent and irreversible.

Such a pessimistic notion of myopia didn’t jibe with Bates’ years of clinical experience. He eventually began to have serious doubts about what he’d been taught at medical school concerning nearsightedness. Year after year he had observed numerous cases where the degree of myopia seemed to instantaneously fluctuate briefly while being measured. The number of cases he observed weren’t simply isolated anomalies. Visual acuity for distance focusing seemed to be active and flexible, not passive and static as the orthodoxy maintained. The facts troubled him greatly and he simply couldn’t just ignore them, for he stated, “It seemed to me that if a statement [theory] is a truth it must always be a truth. There can be no exceptions. If errors of refraction [myopia and other blurry eyesight conditions] are incurable, they should not recover, or change their form, spontaneously.”[27]

Bates was determined to find answers to the facts he faced which conflicted with textbook doctrine. He embarked on a series of experiments over a period of six years, studying the eyes of various animals as well as analyzing vision in humans. He concluded that visual acuity was largely in the mind of the beholder. By introducing the mind into the equation, he essentially reunited the false object-subject dichotomy. His radical new theory can be summarized as follows:

When spontaneous changes in acuity temporarily sharpen one’s focus, they are referred to as flashes of near perfect vision. In the introduction of my book, I described the first spontaneous flash I had experienced early in my natural vision improvement process. I had several more flashes from time to time before I had discovered Bates’ explanation of this phenomenon. Optometrist Antonia Orfield, in a 1994 journal article, described them as “momentary fluctuations of clarity.”[28] She was speaking from first-hand experience, as she perceived these fluctuations during the process of completely reversing her own myopia.

Some of Orfield’s other observations were very similar to Bates’ rejection of the orthodox teachings of myopia. She stated, “The optical bench model distracts us. It makes us think that distance vision is a passive process of light falling on the fovea [the small central area in the retina with the most light receptors]. It isn’t. As I learned during my training, ‘vision is a motor act,’ and if patients realize this they are empowered to work on their vision. I never tell them they have long eyeballs. That is so fatalistic, so permanent, so mechanical, and so often wrong.”[29]

Orfield’s training was behavioral optometry, obtained only through post-graduate extension programs, not part of regular curricula in optometric colleges. Arthur Skeffington founded behavioral optometry, a holistic approach to vision, in the mid-twentieth century. It was an amalgamation of concepts he had developed from studying and meeting with “leaders in psychology, neurology, education and other disciplines,” including the likes of Hans Selye, Arnold Gesell and Wilder Penfield.[30] His maxims of “vision is motor” and “vision is learned,” encapsulated eyesight as a dynamic mind-body process which is molded by the environment, potentially impeded and impaired by negative influences.[31]

Skeffington started his optometric practice in 1917 and began sowing the seeds for behavioural optometry during the next couple of decades. It’s highly probable that he would have known about Bates’ book (pub. 1920) and his regular monthly magazine, Better Eyesight (pub. 1919-1930). Perhaps such material influenced Skeffington’s thinking early on — pure speculation on my part. If that was the case, incorporating and acknowledging some of Bates’ ideas would certainly have been too damaging for Skeffington’s endeavor given Bates’ negative reputation by the establishment. Even so, behavioral optometry is derided and ridiculed to this day by the old-guard-paradigm police and their banal propaganda tactics.

In any event, Bates’ theory also applied to conditions such as astigmatism, where the front portion of the eye tends to have a nonsymmetrical, warped curvature. Bates himself had the ability to produce, at will, a change of one and half diopters.[32] He also noted the case of a surgeon at the Manhattan Eye and Ear Hospital who was similarly able to produce even greater astigmatism as witnessed by hospital staff and other eye doctors.[33]

Because myopia was determined to be a functional disorder, Bates was confident its progression could  be halted and reversed. He eagerly went to work teaching numerous children and adults how to improve their visual acuity naturally.

Next Blog Post:
Section 5.  A Successful and Empowering Solution to Control Myopia

[24] Burton Randall, “The Refraction of The Human Eye: A Critical Study of The Statistics Obtained by Examinations of The Refraction, Especially Among School Children,” extracted from the American Journal of the Medical Sciences (July 1885): 2

[26] Merrill Bowan, “The Myopia About Nearsightedness, II. What is Myopia?” http://www.nb.net/~sparrow/myopianear.html.