"> “Meniere’s no more” Inspires “Myopia no more”
Skip to content 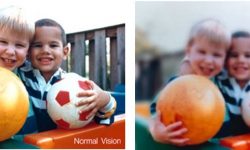 According to Wikipedia, “Ménière’s disease (MD) is a disorder of the inner ear that is characterized by episodes of feeling like the world is spinning (vertigo), ringing in the ears (tinnitus), hearing loss, and a fullness in the ear.”[1] For many sufferers of MD, the vertigo attacks can be an utter hell. They try to carry on a normal life in between attacks, never knowing when or where the next one will hit.

Several years ago, an ear, nose and throat doctor diagnosed me as having MD. I first had a standard hearing test followed by a quick ear examination. However, his immediate diagnosis of MD was based more on my descriptions of symptoms I had from time to time. The specialist told me the cause of MD was unknown and that there was no cure. Cut back on caffeine and sodium intake were his only suggestions. I didn’t bother telling him that I don’t drink coffee and that my salt intake is moderate. That’s because I sensed his impatience of wanting to see his next patient, so I went on my way.

I didn’t buy into the MD diagnosis for my case. My symptoms were quite mild in comparison to others’ I’d read about. However, many do accept the MD diagnosis and end up on the doctor merry-go-round, visiting one specialist after another, desperate to find someone who could possibly provide relief. That was the situation for one woman, until serendipity turned in her favor.

Alternative and holistic practitioners address the underlying cause of MD in order to effectively reverse symptoms. A woman who struggled for years with MD, and the psychological depression that went with it, found out about such treatment. By sheer coincidence, she was recommended by a former MD sufferer (whom she’d just met) to see a practitioner who specializes in Functional Neurology.[2] The woman and her husband gave this emotional testimonial on YouTube describing the miraculous outcome of the treatment:

People who receive such therapy for a specific symptom are pleasantly surprised to discover the holistic aspect of the healing. This man, who was treated for tinnitus, discovered he had improved peripheral vision (4:10 point in video) and improved distant vision (6:19 point in video), after three to four treatments:

Others have found out, as I did, that a jaw joint problem (TMJ disorder) was the root cause of their vertigo issues and other ear symptoms. The false MD diagnosis simply had stigmatized these people for years and left them in despair. One such person eventually started a Facebook community page, “Meniere’s no more,” to spread the word to help others who may be struggling and coping without hope.[3]

The parallels between MD and myopia are striking. For MD, Wikipedia states, “The cause of Ménière’s disease is unclear but likely involves both genetic and environmental factors.”[4] For myopia, the wording is almost identical: “The underlying cause is believed to be a combination of genetic and environmental factors.”[5] Both disorders are mysteries to orthodox medical science, with no known cause or cure. The conventional palliative approach is to simply treat the symptoms, not the disorder.

Myopes have been stigmatized for too long, believing they simply have “bad eyes” and that their condition is incurable. However, the words “no more” in the “Meniere’s no more” Facebook page inspire a similar outlook for myopia. In that context, think of Natural Vision Improvement (NVI) as “Myopia no more,” turning away from the fatalistic conventional diagnosis to pursue the holistic solution. In fact, success with NVI is complemented with various alternative and holistic modalities that help relieve tension in the head, face and neck areas.

Reference Notes
[1] “Ménière’s disease,” Wikipedia, The Free Encyclopedia, https://en.wikipedia.org/w/index.php?title=M%C3%A9ni%C3%A8re%27s_disease&oldid=780453953 (accessed June 14, 2017).
[2] John Lieurance, “The Ultimate Healing Therapy: If Healing Is Possible, Consider It To Be Within Your Reach!”, Functional Neurology, http://functionalcranialrelease.com/functional-neurology/ (accessed June 14, 2017). Dr. Lieurance specializes in Functional Neurology and is trained in several treatment techniques, including Neurocranial Restructuring (NCR) and Functional Cranial Release (FCR). I haven’t personally undertaken either NCR or FCR treatments, nor do I have any vested interest in promoting such techniques. The brief information and videos provided in this post are for information purposes only and do not imply approval of either the safety or effectiveness of NCR or FCR.
[3] “Meniere’s no more” Facebook page, https://www.facebook.com/MenieresNoMore/ (accessed June 14, 2017).
[4] “Ménière’s disease,” Wikipedia.
[5] “Near-sightedness,” Wikipedia, The Free Encyclopedia, https://en.wikipedia.org/w/index.php?title=Near-sightedness&oldid=778565776 (accessed June 14, 2017).

I cannot believe I was just tricked into watching a cheesy ad for NeuroCranial Restructuring™ . I really don’t know what direction this site is going again 🙁

Your comment is a case of the pot calling the kettle black. I can’t believe people would be tricked into reading any “cheesy ads” (posts) on this website about the Bates Method. Any eye doctor will tell you that Bates was a quack and natural vision improvement is useless.

Sarcasm aside, please read the last part of note 2: “I haven’t personally undertaken either NCR or FCR treatments, nor do I have any vested interest in promoting such techniques. The brief information and videos provided in this post are for information purposes only and do not imply approval of either the safety or effectiveness of NCR or FCR.”