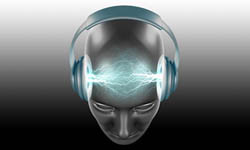 I started exploring meditation a little bit recently. Or should I say, exploring it again. I did it in the past, off and on, but I never really had a clear idea of what I wanted to accomplish with it.

Earlier this year a forum member, Nick, started a thread about binaural beats. At the time I didn’t pay any attention to it.

Dr. Bates wrote a lot about relaxation. But what are the primary attributes of what we call relaxation? How can you quantify it? One way of thinking of it quantitatively is by brainwave patterns. Brainwave frequencies are well-defined in literature everywhere as belonging to one of several levels. You can google it and find more information. The frequency ranges are defined slightly differently depending on the source, but the the names of the basic ranges are described consistently based on the approximate frequency ranges.

You normally pass through alpha and theta on your way to the deep sleep of delta, but you can also sit and meditate to find your way into theta. Here’s where binaural beats come in handy, supposedly. They are stereo sounds that you listen to with headphones, with the frequency in one ear about 4 Hz faster than the other ear. It’s supposed to help get your brain in sync with the 4 Hz frequency, which is at the bottom end of the theta brainwave range.

So I tried it. I’m a little unsure as to whether my headphones are mixing some of the stereo sounds. It sounds like they are. You don’t want that to happen. The left and right channels need to be separate. But regardless, I tried it. I blew through 30 minutes before I knew it. Now if you get into meditation, there are all kinds of things you could experience, and I won’t go into the things I experienced here, or ruin it for you. I’m starting to see that meditation opens up a whole new world. You think you’ve got a firm grip on reality? If you’re anything like me, once you start to meditate enough times your grip will start to slip. What is it you’re grabbing onto, anyway?

The sound of the track isn’t irritating. It’s actually kind of nice, even with the plain old frequency waves and no added background music.

There are a lot of different ways to record the sound, so the base frequencies can be at any level, as long as they are 4 Hz apart. The thing is these sound tracks aren’t a magic tool. They are also harmless.  But they may be the help you need to learn to get into theta, and best of all, you should be able to eventually do it on your own without the need of the sounds. So it isn’t something you will need to be dependent on. Changing your brainwave patterns is an innate ability. It will seem pretty familiar. Heck, you do it every night when you sleep!

What does this have to do with vision improvement?

I didn’t want to turn this into a sales pitch for binaural beats, but the point is, I got to thinking about how the theta brainwave state is really a deep state of relaxation. So learning to get to this state might help you with improving your vision. Try it out for a while and share your results! The fact that the theta range is defined as the area of vivid visualization can be useful. That kind of visualization can help turn on your brain and get you used to visualizing, and even better, teach you how to see with constant feedback.

If you do the wrong thing, the image disappears. If you do the right thing, more of the image will flesh out. If you do sort of the right thing, it stays about the same. That’s some pretty stark feedback. Normally when you do the wrong thing with your eyes open, you won’t instantly lose your eyesight. It just gets a little blurry, or blurrier, or maybe just stays as blurry as it is. So I hope you can see how a clearer feedback mechanism has the potential to be an awesome tool.

You can download software called Ginaural to create your own audio tracks, but you can also buy CDs on Amazon.. The CDs are made by the company Hemi Sync, which I think was established by Robert Monroe, or anyway it has something to do with him. They have great reviews. I may go ahead and buy some soon.

David, thanks. I’ve been meditating daily for 3 and a half years now, taught by my energy medicine teacher Deborah King. It’s lowered my anxiety level enormously, and helped me be much more peaceful on a more consistent basis. She says this time of year (November to January) our meditations should be longer, then we’ll have more energy the entire rest of the year. I’m just starting to play with visualizing when I’m not meditating, tapping into that same familiar calm mindset. Everything really IS all right!

I guess that makes sense, but heck, I’d rather do it all year long! I’m not good enough to have the patience for more than about 30 mins. I’ll have to increase the time slowly as I’m comfortable so I don’t start avoiding doing it at all.