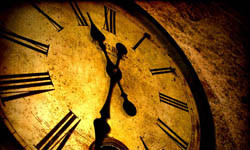 People get stuck sometimes, like they try to follow instructions but it doesn’t seem to work instantly. Don’t change your plan in the middle of testing it, or you’ll never find out what really helped you. It can take some time before what you started doing a few minutes ago or longer has a noticeable effect on your vision. Sometimes it might be near instantaneous, but other times, or for other people, or particularly in the beginning, there’s a significant time lag.

That’s the way the world works here. If everything we instigated happened instantaneously, it would be a confusing and out of control place where you have to constantly deal with the consequences of your errant thoughts creating inconvenient things.

So when you get a flash of clear vision, don’t attribute it to what you did a split second earlier. You’ll be left wondering what you could have done that somehow you can’t even remember, despite it being just a few seconds ago. The reason that’s so hard to figure out is probably because you’re looking in the wrong place. More likely the cause of your clear flash was something you started a moment before that, and you didn’t take into account the time lag.

Understand also that when you start something and then move on to another thought, what you started continues for a while. So if you were to work on having a more positive attitude, for example, your attitude doesn’t necessarily change just because you start thinking about your planned bike ride this afternoon. It might continue without you knowing it.

The subtle changes in the way you use your eyes work the same way. Practice it intensely, and if you find that what you are doing has value, set your intention to keep practicing that while you are doing everything else today, or this week, or indefinitely. Subconsciously you will continue doing it until you are told to stop, or perhaps after some amount of time has passed that depends on other factors, at which point the intention will begin to fade. The point is that you won’t keep practicing it unless you tell yourself that you’re going to keep practicing it, and then leave it alone, letting yourself practice it without you interfering with yourself, if that makes sense. When you have time to dedicate the intense and thoughtful practice time is valuable too, because your subconscious works best the more specific you are about what you need to do, and to give yourself specific standing orders for improving your vision you gotta know what you’re talking about.

Ok, I may have gotten off track. You know what, let me give an example of making use of the time lag. Even though you might think the time lag makes things harder, it’s really an advantage, because you can mitigate the noise in your mind and put more emphasis on what you want.

I know it might be inconceivable to some people that you don’t have to actually work at focusing for your eyes to focus. Surely there must be something you have to do to help your eyes focus? No, not really. Focusing your eyes is such an innate and delicate action that it doesn’t need brute force, and brute force will only disrupt it. You might not even need to set the intention, but it should only help.