"> Results Don’t Matter – A Lesson from Poker
Skip to content 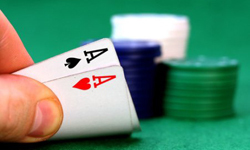 What a stupid thing to say! After all, you want results, right? The whole reason you’re working at vision improvement is to get the results and be able to see, right? Sure, we can say how “it’s the journey that matters,” but at the end of the day you either have to deal with blurry vision or not.

Have you played poker? I mean really played, as a student of the game. It’s all about taking advantage of probabilities. You analyze the situation, based on the cards and his style of play, and you make the appropriate moves that will most likely show the biggest profit. You’re making the right move if often enough you win his chips, or at least if you win often enough from players like him. Sometimes he will beat you. Those times he beats you, it doesn’t mean you were wrong to do what you did. Sometimes he’ll catch a miracle card. Sometimes your strategy dictates that you have to lose more often than you win, but you get paid off big time when you win.

Good players don’t let bad luck get to them. They know what they’re doing works, and they know they have to keep their cool and continue at it even when the cards seem to be against them all night. They avoid the trap of judging their play by how much money they won or lost on any given hand. When they win a big pot with a lucky card they consider it a loss, because long term they are behind if they play the situation that way. When they lose a big pot to an opponent who hit a lucky card, they consider it a win. Sometimes they aren’t sure, and they have to analyze the hand later to determine whether they outplayed their opponent or not. In other words, results don’t matter.

And when you have an eye chart on the wall, and you look at the first letter on the line and it’s blurry, you don’t worry about that result. You ignore it and make the right decision anyway. As soon as you look at the first letter, you move onto the second letter. And as soon as you look at the second letter, you again know that you’ll either get paid off or not, so you’ve done everything you can at that point, and you have to just move onto the third letter. And so on down the line, and to the next line, back and forth.

There are some other factors at work, mainly along the lines of keeping your nerves relaxed, breathing, and blinking, and some of those will throw off your results if you don’t incorporate them, so like poker you keep adding enough of the factors to your play until you’re playing a winning game. But you don’t throw away good moves just because by themselves they aren’t good enough to get you ahead. You you have to give it a chance and build on it, remind yourself constantly of the good moves you know, keep doing them, and identify opportunities for improvement. Over time by this process your good moves will become even more effective and make more sense.

So just because your vision doesn’t clear up right away, it doesn’t mean you’re practicing the wrong thing. Also see my post Working with Time Lag. You might not be practicing it perfectly, but hey, nobody’s a perfect poker player. If you do the right thing often enough, you get paid off. If after enough attempts you don’t see a payoff, re-evaluate your game.

Your vision does not respond well to your asking, “Does this work? Does this work?” and expecting to see the answer right away. Your anxiousness by itself ruins the process. You should be as passive to the results as if on each spot you look at you’re holding out your hands, waiting for a clear detail to drop into them. You aren’t grabbing anything or making any effort to bring the detail into existence for yourself. You’ll get results based on how relaxed your nerves are and how quickly you keep moving to the next point, and probably other factors that I don’t understand.

And the results of this don’t matter whether they’re good or bad, because when you make them matter too much you ruin the process. Sometimes you’ll get a brief moment of clearer vision and not understand what it is you did, or you’ll come up with a weird idea of why it happened. Just keep it simple. If you can’t avoid the fact that your vision is becoming clearer and you’re seeing more, just ignore the fact, keep doing what you’re doing, and notice that you will continue to take in those details even when you aren’t aggressively grabbing at them as they appear. If your vision get worse, then great, you have less to be distracted by!