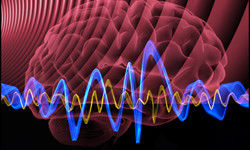 Relaxing your eyes, or relaxing your mind, is supposed to be a major part of the Bates method. It underlies every exercise.

Dr. Bates went so far as to say that nothing else matters.

By constant repetition and frequent demonstration and by all means possible, the fact must be impressed upon the patient that perfect sight can be obtained only by relaxation. Nothing else matters. – Perfect Sight Without Glasses, Chapter 9

But what does it mean? When Dr. Bates had his patients palm and visualize to relax, he was on to something, but he didn’t understand it as well as we can understand it today with just a little research. Back in Bates’s day, relaxation was the best word he had at his disposal that was widely understood. Today we don’t have to rely on such a crude understanding. We can explore the topic and identify what relaxation really means in the context of vision improvement.

A couple years ago (wow, has it been that long?) I wrote about binaural beats, a method to encourage your brainwaves to move towards a target frequency by means of asymmetric frequencies played through stereo headphones. While the technology may be debated, it’s nevertheless well-documented that meditation, sleep and other in-between states of consciousness are associated with different brainwave frequencies. There is a nice chart here outlining the full range. So one way of defining relaxation might be a particular brainwave frequency range such as alpha or theta, or in relative terms a lower brainwave level than you normally are at.

Lower brainwaves are associated with the below experiences, so there’s no need to get sophisticated equipment to try to directly measure your brainwaves. For the purposes of vision improvement you would be getting off-track if you get too wrapped up in identifying what brainwave range you’re at, but it’s fascinating to me for the purposes of experimenting with and exploring meditation and altered states of consciousness.

Another sign you’re getting to the right place is mental imagery. Dr. Bates placed a lot of emphasis on this as having a strong correlation to better vision, noting that people with poor vision also have lousy visualization skills compared to those with normal vision, being relatively unable to picture a vivid image, relying on vague impressions of shapes and colors instead.

Have you ever heard a ringing sound, a high pitched noise coming from nowhere? Tinnitus can be one reason, but tinnitus is constant and annoying. This ringing I’m talking about can come and go, change in intensity, and you can exert control over it. You might suddenly hear it when you’re sitting still or meditating. There have been a wide range of claims about it being anything from a sign of spiritual connectedness to simply a white noise that you always hear but don’t usually mentally process. But it can be one sign that you’re relaxing.

At times you feel intensely concerned with what’s going on around you to the point of feeling on-edge, nervous or fearful. In contrast, at other times (hopefully) you feel more at ease and less concerned about the immediacy of your physical environment, being completely content to take your time in whatever you’re doing. Meditation takes this feeling further, to where you shift your focus away from physical awareness to some degree. How far you go can be a wide spectrum, and here we’re concerned with something just enough off from a hyperactive, stressed feeling, where your brainwaves are lowered just enough to be calm but remain completely physically functional. This is what we mean when we talk about being “relaxed.” It has nothing to do with your level of activity or inactivity but is a state of mind.

I’ve started experimenting (again) with meditation and learning to control my state of consciousness. That’s pretty exciting and a whole subject in itself. But I’ve found that with practice it’s easier for me to raise and lower my brainwaves, or presumably that’s the physical explanation for what I’m doing as my consciousness changes. At first you need some techniques to work with that will help you drop down, but eventually you don’t rely on techniques so much and just do it. It’s an innate ability, and a lot of it should feel very familiar, as you pass through some of it when you sleep each night already or even when you daydream, without realizing what you’re doing, because it’s actually so easy that it’s somewhat automatic. You just have to get used to the shift in consciousness so you’re more conscious of what you’re doing.

I found the first set of CDs of the Gateway Experience to be helpful with practicing this.

Once you can lower your brainwaves a little bit through spending time doing some technique, you’re in better shape to practice various exercises of the Bates method. You might find right away that some simple exercises suddenly magically work, such as little more than noticing all the details and looking from one spot to another and watching them all pop out with no effort. If you have practiced much, you have probably experienced times when a certain exercise seemed like the perfect one and totally effective, and then the next day it didn’t work at all. Or a moment of extremely clear vision that went away again just as mysteriously. These experiences might be explained by the requirement to be in a certain state of consciousness (or a certain range… no need to be exact) for your visual system to function effectively.

Different states of consciousness have different rules, so you’re capable of doing different things in them. Some tasks you can’t do in different states. Why is this? I don’t know. But you have probably noticed that in your dreams at night you have a hard time with certain memory tasks or math. Or that while you’re in the wide-awake “beta” brainwave state you eventually get physically and mentally exhausted and need to move into sleep mode for a while to accomplish re-energizing yourself. But there are also what you might call in-between states, or at least they are in-between wide awake and asleep as far as brainwave frequencies.

Brainwave readings also show multiple frequencies, so these alpha, beta, etc, frequency ranges are characterized by a predominance of one frequency. People also have different combinations of experiences while meditating, an extreme example being that of being able to walk around in a deep trance. But have you ever been driving your car and suddenly realize you were so lost in thought that you can’t remember the last few miles that somehow you navigated just fine?  Or have you read a page of a book and then realized you can’t remember a thing about it because you were thinking of something else? Or you’re having a hard time with a task and you take a moment to “relax” and thereby find yourself more capable of doing the task, and the result is that in one way your attention is the same as before while in another way it’s different.

So as far as vision goes, it might be optimal for us to be involved somewhat in more than one state of consciousness to be able to utilize the tools in each state as part of a cohesive ability to see clearly. Bates discovered that people with blurry vision also had lousy visualization skills, to a degree matching that of their blurry vision. The calmness and visualization comes from one state, and the attentiveness to the data coming from your eyes is associated with another state.

Vision is only partly about your eyes. They can’t do it alone, and when you try to rely on them exclusively you abdicate the necessary components that make vision work, resulting in a feeling of strain as you try to rely on one piece, and worsening vision. Make a subtle change in your habits, taking a moment as often as you can to lower your brainwaves. You will make things so much easier on yourself and become more capable of seeing clearly without effort.