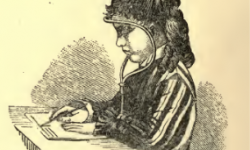 Section 4, the final part of this article, is a continuation from the previous blog post,
Orthodox Myopia Research: Blind Alleys and No Cure: Section 3.  Optical Poison Transforms Into Optical Elixir

A 2011 article in Scientific American suggested that the war on dietary salt has to end because of the tenuous science of the zealots who had demonized the nutritional substance in the name of heart health.[27] That skirmish pales in comparison to the battles that have raged on for two-hundred-plus years in vision science.

An optometric research paper in 2013 noted that ideas about the cause of myopia have been “trapped in a debate of either/or” — near work stress (environment) or genetics.[28] The opponents claimed to have obtained strong scientific evidence to back their respective arguments. Yet, the findings and conclusions drawn by each side were far from ironclad when other researchers challenged them with their own studies. As the research paper aptly noted, “Nothing ruins a good dogma like data.” In 1921, Bates had similar thoughts when he suggested, “Such dogmatism is both unwise and unscientific… [and] throttles research.”[29]

Not only has the science been tenuous for the warring factions, there has been no science to support the continual use and long term safety of concave glasses, the standard treatment for myopia. The American Vision Institute eye doctors stated, “The truth is that no clinical studies have ever demonstrated the long-term effectiveness of ‘corrective’ lenses. To put it bluntly, the traditional method of prescribing these products is an untested and unproven form of treatment [their emphasis].”[30] 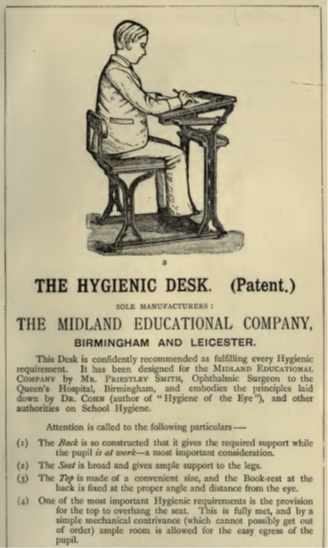 The causal hypothesis for myopia that prevailed among most nineteenth century eye doctors and researchers was a combination of nature and nurture. Very few apparently dug in their heels with an extreme dogmatic stance one way or the other. Most took the middle ground of Ferdinand von Arlt, an Austrian ophthalmologist and professor. He believed “[t]hat short-sight itself cannot be looked upon as hereditary, but only the tendency to short-sight.”[31] Heredity was considered to be simply a pre-disposition and that the demands of the classroom caused nearsightedness to develop.

The Germans were the first to take action to help prevent the development and worsening of myopia in school children, and other countries soon followed suit. Cohn published a book, later translated into English in 1886, recommending numerous specifications for schools to follow with regard to environmental/ergonomic conditions. The hygienic regulations (the term hygiene back then was a much broader definition than simply cleanliness and sanitation) were incredibly detailed and included: adjustable school desks (see Figure 4.1) for good sitting posture and proper eye distance from the desktop; face-rests (see Figure 4.2) to prevent stooping while doing near work; window sizing to ensure an adequate amount of daylight from the sun; degree of illumination and placement of artificial lighting; style and size of handwriting as well as type of pen ink; blackboards, including type of chalk and size/style of writing for teachers; techniques for drawing and other handwork lessons; type of paper and size/style of font in texts; time spent in lessons, and number and length of breaks to prevent overworking the eyes.

After these measures were in place for three years at a couple of schools, the slight reduction in overall myopia rates showed some initial promise. However, once statistics were gathered from more schools, the results were very disappointing. In 1897, Philadelphia ophthalmologist and professor S.D. Risley stated, “But, notwithstanding the introduction of much-needed reform in all these matters, the injurious results of the educational process were not notably arrested… The wide-spread popular impression that near-sight is handed down from parent to child has directed attention to heredity as a probable foundation for the malady.”[32]

That seemed to be the tipping point (Figure 4.3), directing the earlier suspected cause of myopia from a combination of nature and nurture to one solely due to genetics. It appears that most jumped on this new bandwagon, convinced that nothing could be done to prevent the affliction. Is it any coincidence, then, that the American Optometric Association (AOA) was established in 1904 to tap into the market demand for more eye exams and more eyeglasses?[33]

Although the new-held belief put the blame on bad genes for myopia, results from research that was ultimately done to support this idea was weak. The conclusions were far from pointing to heredity as a smoking gun. Decades later, some researchers revisited the notion of near-work being a cause of myopia and supplied impressive data as evidence. But eventually, other researchers refuted these claims with data showing no such correlation. Academic ping pong.

Current research models seemed to have reached an impasse, returning back to the nineteenth century idea of both genetics and environment. A 2013 optometric paper stated, “The more recent view, informed by an explosion of information from research in the last 20 years, has moved toward a melding of these two extremes into a richly detailed combination of both nature and nurture.”[34] Square one yet again.

At the turn of the twentieth century, Bates didn’t buy into either genetics or excessive near work as the cause of myopia. There were too many exceptions in his years of clinical practice that showed neither theory to be a major factor behind nearsightedness. He developed a radical new theory based on myopia being an acquired condition and provided a natural treatment method that didn’t involve eyeglasses. It was truly a beacon of hope for the public afflicted with myopia, who’d been assured before by other eye doctors that the condition was incurable and irreversible.

Into such a slough of despond and contradiction have the misdirected labors of a hundred years led us!

– W.H. Bates, commenting in 1920 about the state of myopia research

Lawrence, I agree about “Is it A or B?” without looking for any other possibilities. I’ve heard of schools scheduling in more recess time outdoors for kids to give them more natural light, hoping to combat the growing problem of childhood myopia. I remember reading about a school planned to be built in China, where the myopia problem is enormous, with a glass roof so the kids would be exposed to natural light all day long. I’m not aware of any current studies that show improvement with natural methods, just lots of individual anecdotal cases. Bates’ work with schoolchildren in NYC 100 years ago is a rich source of data, and everyone discounts it. Maybe we’ll hear more on this soon from Doug’s articles.

Yes, Nancy, Section 5 of my current article will detail Dr. Bates’ successes with schoolchildren as reported in the New York Medical Journal.

Look forward to reading the next instalment!

Great article, by the way!

Thanks, Lawrence. I appreciate your positive feedback!

It’s always interesting when the argument becomes so entrenched between A as opposed to B, and visa versa, that C to Z are not even considered! This is such a narrow argument – for example, there’s an initial assumption that the education system is a non-negotiable, and the argument flows from there. Perhaps part of the problem is the system itself, kids being forced into an unnatural learning environment? The stress and strain that causes….

These types of entrenched “us vs. them” clashes tend to go on in other sciences. (I’ve seen battles in sports biomechanics research too.) The endless debates go on behind the scenes from the general public. Young researchers simply follow the lead of their mentors and have nothing new to offer. Meanwhile, the theorists don’t concern themselves in the least with the standard “treatment” of prescribing (over-prescribing!) minus lenses. Do they really think that prescribing glasses simply keeps up with progressive myopia? I beg to differ. Too many young people end up like this unfortunate woman.