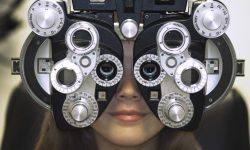 Section 3 of this article is a continuation from the previous blog post,
Orthodox Myopia Research: Blind Alleys and No Cure: Section 2.  Latest Myopia Research Findings Lead Back To Square One

In my article in the July-August 2015 edition of New Dawn, I discussed the concept of optical poison from the standpoint of the very few twentieth century eye doctors who continued to carry the torch publicly about this problem.[17] By that time, the idea had fallen out of favor once annual eye exams and prescription eyeglasses became the norm. However, as the archives of myopia science show, the topic was very much front-and-centre among eye doctors during the nineteenth century. The consensus in that era was that concave lenses were detrimental to the growing eyes of youth.

Ware seems to be the first eye doctor to mention the problem in the scientific literature. He stated the following in his 1813 paper to the Royal Society: “The misfortune resulting from the use of concave glasses is this, that the near sightedness is not only fixed by it, but … frequent changes are made for glasses that are more and more concave, until at length the near sightedness becomes so considerable, as to be rendered seriously inconvenient and afflicting.”[18] He also noted that several of the nearsighted persons he’d met had their right eye more myopic than their left eye, most probably due to the use of a single concave hand glass. Such nearsighted students would hold the hand glass over the right eye to see at the distance in the classrooms and then remove the hand glass when reading or writing. The left eye was never subjected to focusing through a concave lens, so it was less myopic.[19]

Seventy years later, eye doctors continued to be concerned about the use of concave glasses on children. In Germany, Cohn wrote, “There is still a difference of opinion among oculists as to prescribing spectacles for young myopes. Some have a horror of any kind of spectacles so long as the eye is still growing. Others (and, as I think, rightly) prescribe, for medium degrees of myopia, spectacles weaker than are required for neutralization, with the condition that they are not to [be] used for writing, but only for looking at distant things — for the blackboard.”[20]

Cohn went on to state his preference for hand glasses: “At all events it is generally better to prescribe, not spectacles, but lorgnons [hand glasses] … where the eye makes frequent changes from the black-board to the note-book, can drop off, or be taken off, much more easily than spectacles.” If students were to become annoyed with having to continually remove spectacles in this manner throughout the school day, they would quit doing so and simply leave them on all the time. The consequence, he noted, would lead to a “decided increase” in myopia.[21]

Cohn also suggested an experiment to help determine the degree to which concave lenses might be injurious to myopic children. Two groups, each having an equal number of myopes studying under the exact same classroom conditions, could be tested over a number of months and years. The control group would not wear spectacles, while the second group would. But, Cohn admitted that it wouldn’t necessarily offer conclusive proof, “as hereditary tendencies and individual differences would constantly exert an influence.”[22] I don’t know if anyone had ever conducted such an experiment back in his era.

Eye doctors in other countries also expressed their concerns about the dangers of eyeglasses. In 1871, Friedrich Erismann, Russian ophthalmologist and a leading myopia researcher of his day, concluded “that the use of concave glasses is in itself distinctly injurious for those eyes which are still in the process of changing their refractive relations.”[23] In the U.S. in 1890, Dowling recommended the use of concave glasses as optional for students with low degrees of myopia, “as [spectacles] have very little, if any influence in checking the progress” of myopia. [24] When they were used in such cases, he recommended a weaker prescription than required to fully compensate for the refractive error. He went on to recommend that glasses not be prescribed before the age of fourteen.[25]

At some point in the early twentieth century, these views about optical poison quickly fell by the wayside. Prescribing eyewear eventually became standard practice, and myopic people were advised to wear their glasses (full prescription, not weaker) all the time during the day. Instead of a concern about the potential injurious effect of concave lenses, the table completely turned — optical poison transformed into optical elixir. According to the experts nowadays, prescription eyeglasses are absolutely necessary to supposedly “correct” the myopia and prevent it from worsening.

Theodore Roszak, American author, historian and professor, commented on the tyranny of technology — when tech gadgets, first invented to supposedly improve our lives, become necessary evils for the masses. He said that such technology passes through three cycles — luxury, convenience and necessity — and gave the automobile as a classic example. “In many American cities, it is now a greater necessity than food, clothing or shelter … Without a car, no job and no groceries.”[26]

Eyeglasses have followed this same type of cyclical pattern, albeit an evil in all three phases. Initially, only the educated elite, a small minority, made use of them. Spectacles then became more popular and convenient for the increasing numbers of students enrolled in compulsory education. The final stage, where we’re at to this day, is that eyeglasses are an absolute necessity for every myope in industrialized society, no matter what age or how minor the degree of myopia. (Without clear eyesight, no car etc.) You could also suggest that eyeglasses have even passed into a fourth phase — a necessary fashion accessory, given all the marketing hype about designer frames and celebrities trending the latest styles.