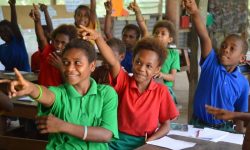 In a recent interview, Biochemist David Rasnick, PhD, recalled some interesting observations he had made about health while working as a Peace Corps volunteer in Papua New Guinea in the early 1990s. [1] He emphasized that the indigenous people of that country were “absolutely the healthiest people I’ve ever met in my life!” He then elaborated with an anecdote that pertained to eyesight health: “I was teaching high school there and I noticed nobody was wearing glasses … no students [were wearing them]. I went to the headmaster one day and said, ‘I guess the students aren’t wearing glasses because they’re just too poor.’ He said, “No, they don’t need them.’ In fact, nobody needed glasses there! They were so healthy – strong capable people – they knew how to take care of themselves.”

The interviewer (Film Director, Mike Wallach) then stated: “This is really what I want to try to capture – and it’s so obvious – but I want to remind people that we are being sold a vision where health is delivered to you by technology.”

Rasnick concurred and responded with a rhetorical question: “How did we exist on this planet for hundreds of thousands of years before the white-jacketed people showed up? I almost accept nothing that’s become mainstream about health … almost nothing anymore.”

Rasnick’s personal observations of the Papua New Guineans were consistent with the findings of the Natural Vision Improvement (NVI) pioneer Dr. Bates. Decades earlier, Bates had documented the excellent eyesight of indigenous people (see my previous post which includes this particular topic).

Although Rasnick may be unaware of Dr. Bates’ research, they share a common trait. Both undertook independent research based on the old ideals of the scientific method – such as objectivity, integrity, free and open discussion – with a goal to discover truths previously unknown. As both men found out, when research findings clashed with the status quo and dogmatic theories, then ridicule, character assassination and professional ostracism soon followed. Rasnick wrote an excellent journal article entitled “The Tyranny of Dogma.” [2] Pure medical science has long been co-opted by mega corporations colluding with big government to market consumer dependence on only one extremely lucrative model. Mainstream disease care (erroneously called “health care”) is rife with corruption and control under the prevailing monopoly.

Those of us who have improved our vision by natural means were raised in our industrialized society accepting as normal so many people wearing glasses. Our parents deferred to the “white-jacketed” authority figures, completely unaware that our modern culture itself was the cause of the widespread vision problems. The addictive impact of prescribed negative lenses – the technological “solution” – added insult to injury by progressively worsening the myopia due to years of constant wearing.

If you are new to NVI, don’t be deterred by eye doctors and organizations declaring it to be quackery and useless. Bear in mind that there is a massive propaganda machine at work within the industry that’s intent on maintaining majority control by selling highly profitable vision examinations and technological products (glasses, contact lenses or laser surgery). Sadly, their products cure nothing and lead to long-term damages.

Be inspired by the Papua New Guineans’ robust health and keen eyesight. Take the natural approach to improving your vision; the spin-off from the stress reduction is apt to result in better overall health, as NVI is truly holistic.

What a great article! Preliterate people often have very good sight, often exceeding 20/20. However, as soon as they become ‘civilsed’ and literate (probably in a language that isn’t their own) vision problems often sadly appear and, if glasses are prescribed, with often results in a downward spiral of vision.

Dogmatism in science is a real problem and militant sceptics work well to disseminate their opinions as established, irrefutable fact. To this end they have infiltrated such sites as Wikipedia, to the detriment of its innocent users who might check what it has to say on the Bates Method for example. These ‘scientific vigilantes’ (to use Sheldrake’s phrase) are highly organised and resourced and command a great deal of respect in the media (and consequently the general public).

To be fair to at least one eye doctor, years before I knew anything about NVI I was interested in having laser eye surgery and made an appointment with an eye doctor (as a hospital out-patient) to see what he thought. He strongly advised me against it, saying it was unsafe and irreversible, and that a colleague of his who was a dentist had his eyes lasered and post-op his vision eventually deteriorated to the point where he had to abandon dentistry as an occupation. I can’t remember his name, or if he wore glasses but he did be a great service. U went to see him after reading some propaganda in the papers about how fantastic laser eye surgery was. Thanks to him my enthusiasm for lasering my eyes was totally destroyed!

If anyone wants to read about pseudo-skepticism in general and also about its influence on Wikipedia,

is amazing. Rupert Sheldrake recommended it and that is how I found it.

Yrs ago I asked n Eye Dr. about laser. He said it wouldn’t help so I never considered it. Started Natural Vision Improvement “-8.5/-9” about 38 months ago n ditched the glasses the same week after wearing them for over 48 yrs. So happy I did even though I don’t see 20/20, I’m living life w/o the eye crutches n loving every moment. Have no doubt seeing clear near/far is n my future!

That’s great Jannie! I hope you’ll continue to make progress. My vision some years ago when I took my glasses off was about -7/-7.25. I haven’t arrived at normal yet but I have improved and continue to do so. Imagining/remembering Bates’s principles of Central Fixation have helped me most. You feel better when you see better naturally, it really addresses the symptoms, not the cause. You are so inspiring. Great to hear from you! Keep up the good work!

Thx 4 sharing Darrel… Ur story is very encouraging! Bates was right about most refractive errors r due to the “functional” way we use r eyes ie habits developed over time n that we cannot eat ourselves n2 normal vision. When I 1st took off my glasses I couldn’t handle headlights. Everything revolved around me making it home b4 night fall. It was as though a gazillion lights were hitting me simultaneously. I believe this was overcome by looking down r as Bates said looking an inch r so on either side of the headlight but never directly @ it. I believe studying oneself 2 discover the habit(s) attributing 2 the refractive error then “practice practice practice” 2 break the habit(s) is the path 2 a permanent cure. Thx again n Best with ur Natural Vision Improvement!

Thank you, Darrel, for your positive feedback and for adding your comments about dogmatic defenders of the status quo. Also thanks for including the Wikipedia link — great content!

I had read some of Rupert Sheldrake’s work many years ago and found it fascinating. I also knew how he was targeted by the ‘militant sceptics” for simply having alternative views and theories that disturbed the hard-core materialists in the scientific establishment. Scientism has its own version of evangelists, whether self-appointed or industry-selected and highly reimbursed.

Early in my NVI journey, I experienced a flash of near perfect vision when I wasn’t wearing my glasses. It was a powerful, first-hand affirmation that Bates’ theory and teachings were valid. The charges of quackery against him, and the professional ostracism he received, were absolutely unjustified and shameful.

That’s wonderful that you consulted with an eye doctor who advised against having laser surgery. In my blog post, “Laser Eye Surgery: From Utopian Panacea to Dystopian Reality,” I mentioned an eye doctor who chose not to undergo laser eye surgery herself, yet made a living performing the procedure on patients who did want to have it done. She was personally averse to the supposed “small risk”, but had no qualms about her patients accepting the risks with informed consent. Statistically, some of her patients would certainly have suffered negative outcomes. That eye doctor has a very warped sense of morals and ethics.

The NVI successes you and Jannie are reporting are very encouraging to others!

Doug, thank you so much for your reply! I have read your post that you link to and it is very useful and informative. It doesn’t surprise me at all that weird visual effects like halos and starbursts should occur with so unnatural a procedure as firing what is essentially a laser gun at people’s eyes.

As regards the militant sceptics we discussed earlier, at the risk of sounding uncharitable about them, I would like to quote Aldous Huxley on such people:

“The Common Fool is merely stupid and ignorant. To be a Great Fool a man must have much learning and high abilities”. (After Many a Summer [1939], Part 2, Chapter 8, page 256)

Incidentally the old story about Huxley in agony while trying to read a text to demonstrate NVI (that he had dishonestly memorised) seems to be an old lie. I say this since I have here his biography written by his widow Laura who quotes him as saying he virtually never suffered from headaches. In this posthumous bio (called “This Timeless Moment”) she devotes a chapter to Huxley’s experiences with the Bates Method and seeing it work for him made her strongly supportive.

More power too for Jannie. The NVI community needs more people like her!