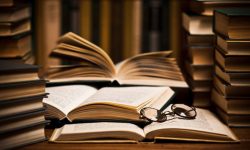 The rapidly increasing worldwide rate of myopia (near-sightedness or short-sightedness) has been in the forefront of mainstream media the past few years, with one article calling it a myopia “boom.”[1] What hasn’t been reported is the myopia “bust” — that for over two centuries, vision science researchers have failed to find the cause or a cure for the disorder. Past attempts had been made to inform the public about the sorry state of myopia research and to provide alternative treatments, but such efforts were quickly snuffed out by the status quo.

In the late 1800s and early 1900s, New York ophthalmologist William Bates had written many detailed research articles, most of which were published in the New York Medical Journal. Numerous case studies were included documenting the successes of halting and reversing myopia in scores of individuals, particularly school children, using his radically new treatment approach. He published his book, The Cure of Imperfect Sight By Treatment Without Glasses, in 1920 to spread the message to a wider audience. Because his holistic approach was far ahead of its time, Bates was labeled a quack and a crackpot by his contemporaries. It’s unlikely either his name or any of his published works are ever to be found in university curricula but, if so, they’re most assuredly brushed aside in a pejorative manner.

Forty nine years later, optometrist Joseph Kennebeck published his book, Why Eyeglasses Are Harmful For Children And Young People. He took a different tack from Bates, distancing himself from Bates’ work (it appears Kennebeck never studied it), but the end result seems to have been the same type of scorn from his professional peers.

Why would two eye care specialists completely risk their professional reputations during their respective eras? Their years of clinical experience in private practice proved the futility and danger of prescribing glasses. They knew full well that the research scientists were continually spinning their wheels, never getting close to solving the enigma of myopia, nor providing a better treatment protocol. They both commented on the large volumes of statistics and endless reports that continued to cover the same old ground, leaving an impression of utter confusion.

The abysmal situation has continued on to more recent times. In a 2002 lecture, Ernst Goldschmidt, a Danish ophthalmologist and vision researcher, succinctly summarized his frustration: “After 40 years of myopia research, I still find the results confusing. The etiology [cause] of myopia is like a puzzle in which some of the most important pieces are missing.”[2]

A 2012 optometric journal report, authored by two PhDs and a PhD candidate, reviewed  several major population-based studies to study the worldwide prevalence and risk factors for myopia. Their conclusion in technical jargon: “The precise biological mechanisms through which the environment influences ocular refraction in humans are, however, still a matter of debate. It is still controversial that exogenous variables interact with heritable factors to modulate eye growth during ocular development.”[3] The grandiose academic lingo may sound impressive, but the translation is rather underwhelming: We’re at a loss to explain what causes myopia. Researchers continue to debate how nature (genes) and nurture (environment) may interact.

The massive amount of repetitive research may be good for the business side, continually tapping into industry sources of funding to ensure growth and steady income streams for academics. But after more than two centuries of scientific investigations, the endless blind alleys and bewilderment about myopia offer no practical solutions for the general public. The assembly line process of vision exams and prescribing  glasses (and eventually laser eye surgery for some) continues unabated. Vision research is desperately in need of more critical thinking — to “think outside the box” as the hackneyed phrase suggests. Those in industrialized nations and developing countries, now impacted more than ever by the rising myopia rates, demand far better answers and solutions from the experts.

Next Post:
Section 2.  Latest Myopia Research Findings Lead Back To Square One

My background is biological research but as I have proven to myself that NVI is possible I am drawn more and more to finishing my education as an optometrist ( Not ophthalmologist because of the time it will take) and research the eyes and follow in Bates footsteps. The only reason to get that title is so people will listen to my findings, but perhaps that is the wrong way to go since they haven’t listened to others. Vision research is becoming an all-consuming passion for me and I know I have the mind for researching it, if I knew where to start!

It’s always good to have someone doing research who isn’t stuck in the way of thinking about the visual system that the school promotes. Personally I would get sick of it on day 1, but perhaps you’ll find the value in it!